In one shining example, we have one candidate who decided it was a good idea to set up a fake The Facebook account and troll citizens and other candidates: https://www.star-telegram.com/news/politics-government/article245638050.html — Yes, a grown man, thinking it’s okay to catfish people on the internet to help advance his cause of getting elected for a non-paid, school board trustee position. END_OF_DOCUMENT_TOKEN_TO_BE_REPLACED

I’m a bit stressed. It’s been a busy 2015 and the last few weeks have been particularly rough. I’ve found in the past that writing can be a bit cathartic for me and of course there’s only so much space for it on my social network of choice. Chris is blogging again so I figure I might as well. The following is probably going to be in a depressing tone, feel free move along if you don’t want to be brought down. END_OF_DOCUMENT_TOKEN_TO_BE_REPLACED

A little Friday music for your listening pleasure. A bit hipster but it features a banjo which makes it banjo hipster. Banjo hipster is good. Similar sound to Sufan Stevens which is as hipster as it gets.

This is a great way to start an album. Takes a minute or so to really get going; my only complaint is that I wish it was twice as long.

Listen and buy the whole album on Rdio.

For a long time multi-tasking was a buzz word in the corporate setting and a desired trait in many job interviews. It’s too late for me to hunt down the research but I have come across a few different articles in the last year or two debunking the myths that we are actually good at multi-tasking or that we are more productive when we attempt to be. As much as I like having a variety of projects to work on, I do find that my productivity tends to suffers when I jump quickly from task-to-task during the day.

I just spent the last 5 minutes testing my personal theories on some simple NYTimes interactive tests. As I imagined, I scored quite well on the Focus portion and fell short of average on the Juggling Tasks (multi-tasking) test. Care to see how you perform? 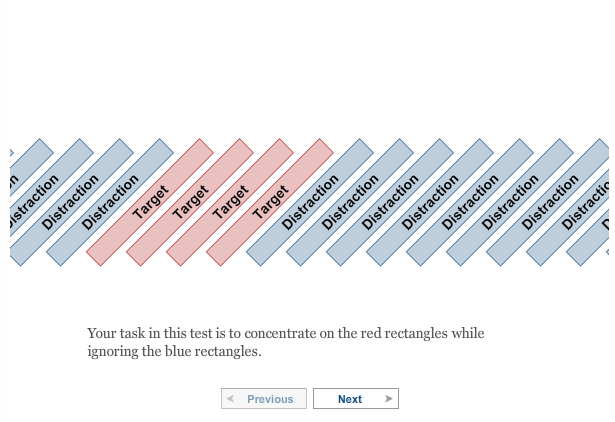