From the Fort Worth Star Telegram: Grapevine church gives away more than 1,000 coats, clothes and blankets

Proud to have been a part of the team that spent the last three months putting this coat drive together. In only our third year of doing so, we collected over 1400 coats from the community and distributed almost 1300 of them in a two hour span this past Sunday. The coat count doesn’t even include the kids clothing, blankets, hats and gloves that we also provided to try and help keep those in need warm this year.

A big thank you to everyone who participated in this work, especially to those who gave. Plenty of amazing stories to tell. Stories of parents who needed coats for their children but chose to bring their old ones to donate that were too small for their kids. Stories of people who traveled from cities all around to participate after seeing it on our website or remembering from years past. Stories of adults who used to attend our church when they were children and now realize that maybe they should be providing that opportunity for their kids as well.

Lives were touched and hopefully seeds were planted. 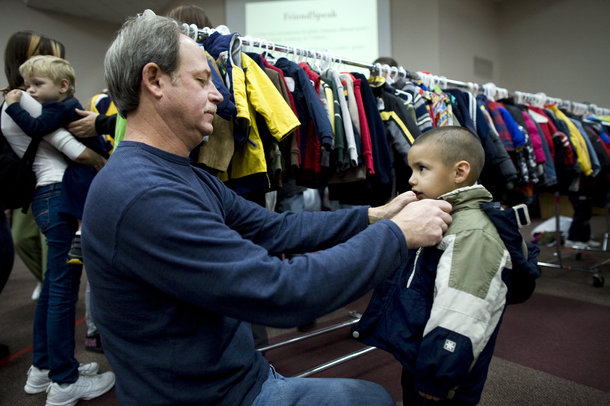 Although it took a lot of hard work and time spent, I’d bet that almost any group of people can put something like this together in their own neighborhood. A little sweat equity can keep the overhead low and you just never know how many people can be affected.

/PDF of the article for personal archiving

My town made ESPN…

Knowing for several years about the Gainesville State School and their football team from both buddies in college and now the workplace, the story of the Tornadoes isn’t new to me.

What is new is that for the first time this year our local Christian school, Grapevine Faith, played the kids from up north (armed guards, as always) and served them up a little of what I call God’s grace.

Nice work, Lions. And LCS Warriors/LCHS Eagles/any other school that takes the time to host this team yearly. I guarantee even if the Gainesville players go 0-8 every year, they wouldn’t trade it for anything other than forgiveness and/or freedom.